Of all the European cities I’ve been to, the one I’d most like to go back to is Rome.  I spent a week in the eternal city in autumn 2010 and saw as much as I could pack in 168 hours.  The Go with Oh competition, where you identify a five-point wish list for one of ten European cities, is the perfect way to decide what would be my must-dos if I got to go back.

There are a few favourites I would need to re-visit, but I would also need to experience some of the key things I missed the first time around. Here are my top five visiting wishes:

1.  Every day (except Tuesdays, when they’re closed) I would visit Il Gelato di San Crispino,

trying at least two new flavours of their artisanal gelato (but allowing myself to have an old favourite as the third).  The owners are extremely particular about their gelato.  They source only the best and in-season ingredients, refuse to use additives, store each flavour at its perfect temperature (to a tenth of a degree!), and will serve their masterpieces only in cups, because cones will mar the flavour.  Luckily they do let you combine up to three flavours in each cup. I’ve been (embarrassingly often) to the location near the Trevi Fountain, and I’d check out the other locations too.  One flavour I am desperate to try, though it is only available for two weeks in June, is the wild strawberry.

2.  I had such a great experience with the semi-private tours of the Vatican museums with My Vatican Tour, I would book another with them.  I am generally anti-tour group, but the early access to the museum, and the incredibly knowledgable guides make this tour more than worth the 89 euro.

There was so much interesting information about history and art that I need to go back and hear it again to hopefully retain more (e.g. what is it with those immense porphyry bathtubs?!).  However, this time, I will let my guide know that I will leave the group in the Raphael Rooms, not caring if I see the Sistine Chapel again or not.  I have dreams of spending hours studying Raphael’s incredible talent with light, particularly in the Deliverance of Saint Peter (my dream, however, does not include the ridiculous Vatican museums crowds). 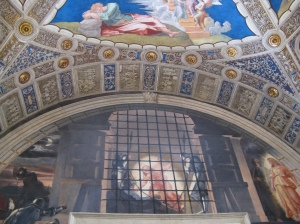 3.  Back to food – finger food in particular.  I would scour the city streets and beautiful market squares

for lamb chops alla scotta dita – literally, burn the finger.  Known in my house as lambsicles, these are individual grilled lamb chops, marinated in deliciousness, and eaten hot right off the grill.  (If you can’t make it to Rome, Union Square Café in New York City makes a mouth-watering version, and they also have a recipe in their cookbook).  If I couldn’t find the scotta dita, I would return to Campo de’ Fiori to have pizza bianca and zucchini pizza at Il Forno (#22 in the corner) — the ONLY place in Rome to have pizza for lunch.  I’d stop by Obika Mozzarella Bar in the Campo for a tasting plate of buffalo mozzarella (and yes, I’d eat it with my fingers to stick with the finger food rule).  Then I would find Dar Filletaro a Santa Barbara (Largo dei Librari, 88), a cult fry shop for filetti di baccala da porter via (fried salt cod wrapped in paper to eat as you stroll), fried zucchini, and, if in season, puntarelle condite (chicory salad).

Well, let’s be serious now, even if I do find scotta dita, I’m not missing out on the other local faves! 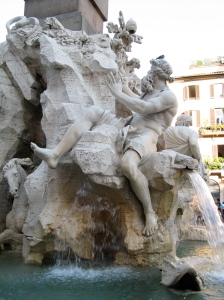 4.  To work up an appetite I would search the city for as many Bernini sculptures as I could find.  Bernini’s sculptures are almost life-like — even in a photo, the Rape of Proserpina is difficult to look at as you can see the force of Pluto’s fingers on Proserpina’s thigh as he kidnaps her and see the tears dripping down her marble face.  You can see Bernini everywhere in Rome, particularly in the Vatican, the Galleria Borghese, and, as a fountain, in the centre of many piazzas.  I would most want to see Truth Unveiled by Time, Apollo and Daphne, Ecstasy of Saint Teresa, and to see both sides of the Elephant and Obelisk to see why the elephant is smiling.

Searching for Bernini’s work lets you explore the twisting streets of Rome and stumble upon other great works, not to mention the occasional snack.  Near lunch time, I would make sure to visit the beautiful Basilica di Santa Maria Maggiore to see Bernini’s simple grave (and afterward I would stop in at Trattoria Monti (Via di San Vito 13a) for linguine with butter and black truffle). 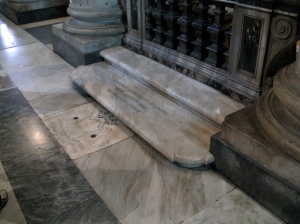 5.  For my last Roman wish, I would head to Trastevere to explore this old neighbourhood’s streets.  I would head first to Saint Cecilia church. Friends told me about this beautiful church which is often empty of other visitors.  Underneath the church you can explore well-preserved ruins of two ancient Roman houses with reliefs and mosaic pavements.  The history of Saint Cecilia, the patron saint of music, is interesting although, as she was tortured and martyred, not very pleasant.  I would like to see the sculpture of her dead body, said to be beautiful.  And, if I were lucky, I would be able to gaze at the frescoes and other decorations while listening to someone thundering away on the organ in the church at the same time.

After wandering around Trastevere for a while, I would eat at Osteria Le Mani in Pasta (Via dei Genovesi, 37) for … yes, pasta.  I would sit next to the kitchen to watch the hands in dough (the translation of mani in pasta) and eat the special pasta of the day (and I would hope that it was seafood or truffle).

These are my five Roman wishes: gelato, the Vatican museums, finger food, Bernini and art and food in Trastevere.  An appropriate combination of the new to discover and old favourites.

What would your top five Rome tips be?  Leave me a comment, or write your own piece for the Go with Oh contest.  Go to www.GowithOh.com.  You can also like them on Facebook and enter to win an iPad, Samsonite luggage, holiday accommodation, or the nifty Panasonic GF3K camera.

For more info on travelling in Italy, see my piece on eating the non-tourist way in Venice on Mallory on Travel’s site HERE,  my article on Rome in the summer 2011 issue of Taste & Travel International magazine HERE, and my field notes on Rome HERE.

2 responses to “Italy: Rome highlights (“Go with Oh” to Rome)”