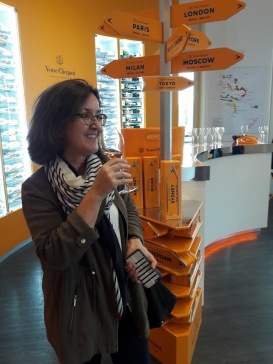 Our 20th Globavore Interview is with Ulrike Lemmin-Woolfrey. She’s a true globavore, having lived (and eaten) in seven countries around the world. Ulrike is the author of several books about Australia, including “Living Abroad in Australia”. Find links to all her writing at www.ulrikelemminwoolfrey.com. Her social media links are below.

1. Who are you and how does food play into your travels?  I am a travel writer and guidebook author currently based in Paris, France. Originally from Germany, I have also lived in the UK, Qatar, Oman, the UAE, Australia and now France. Apart from when I need to write about restaurants, I don’t plan my travel around food, but always check to see what’s best eaten at my destination and try out all the local specialities, especially street food.

2. You’re at your favourite eatery with three companions (fictional, living or dead).  Where (and when!) are you, and who are you with?  I am at Nobu in Hong Kong with Jacques Cousteau, Michael Palin, Ian Wright (former Globetrekker presenter) and my husband, making travel plans. (Ed.’s note: I remember Ian Wright! He was a pleasure to watch on Globetrekker and very few travel show presenters have lived up to him since.) 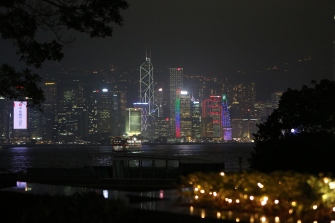 The view from Hong Kong’s Nobu. Photo by Ulrike Lemmin-Woolfrey

3. What are your favourite foods?  I love fish. Not necessarily seafood, but white, meaty fish such as John Dory, halibut, or monkfish. I believe I could possibly live off fresh berries (no cream or other interference), and I adore Scandinavian kanelbullar, cinnamon rolls. All washed down with a Hemingway daiquiri from El Floridita, Havana, Cuba and a few good bottles of champagne. Ed.’s note: mmmmm …. I hear you on the unadulterated berries!)

4. Is there anything that you’d never eat? What is it and why?  I would never have monkey brains from a living monkey, because, well, because; and I do not, despite living in France, eat frogs’ legs because I know how they are obtained.

5. What do you crave but can’t get whilst on the road?  How do you satisfy the craving?  Vegetables, would you believe. Plainly cooked, not dowsed in butter and lots of them. Restaurants rarely give me enough, and salad just won’t cut it. On my last trip to Senegal, I actually packed bags of baby carrots to nibble at.  (Ed.’s note: Yes, I think all frequent travellers would agree!)

6. What food are you embarrassed to admit you like to eat?  Chicken nuggets are a regular, but only sometimes indulged in craving. I also rarely walk past a Pick’n’mix without choosing some sweets.

7. What / where do you dream of eating, but haven’t yet had the pleasure?  There is a superb fish restaurant around the corner from me in Paris, but the prices are so off-putting, that it remains on my wish-list. Also, I have been told to eat hot dogs in Iceland. I don’t ever eat hot dogs normally, but have just booked my first trip to Iceland, so I will certainly try them. I am sure I will prefer them
to the other local speciality of fermented shark…  (Ed.’s note: Plan ahead for the hotdog line-ups in Iceland … I never had enough time to wait so missed out on trying them (though I haven’t eaten a hotdog in decades….)).

8. Strangest meal?  Hands down the duck tongue skewers at Vue de Monde, in Melbourne, Australia. I balked at them first, but they were delicious. In Helsinki, I bought a bag of reindeer chips, and they tasted a little like dried salami. Very moreish indeed.

9. Ever had food poisoning while traveling? Any advice to share?  A pink water ice in Beirut, Lebanon made me use the sick bag on my flight out. A guy asked my husband if I was always like that on planes. (The shame of it.). I have since stayed away from all but really reliable-looking ice cream vendors.

10. Have you fallen so much in love with a foreign dish that you learned to make it at home? What’s the story?  I loved the cuisine in Zanzibar, and bought a cookbook to learn to make the very simple but good kuku paka, soft chicken simmered in coconut milk, and also some coconut-encrusted fish fillets. The recipes have since been bastardised into a fusion of satay and coconut chicken.

11. What’d the first thing you eat after returning home from a long trip?  Pan-fried Cajun-spiced chicken breast with bucket-loads of plain, al-dente vegetables. And chocolate (never as good abroad unless you go to Switzerland).

12. Favourite foreign ingredient you wish your home supermarket carried?  Tins of labskaus! That’s a traditional dish from my hometown Hamburg, difficult to obtain even in the rest of Germany. A strange-looking dish made from pickled beef, potato and vegetables, and eaten with a fried egg and beetroot. And German sausages.

13. Country / city where you’ve found the best food? Details please so we can check it out too!  Vietnam. Phô and rice paper rolls are so simple and fresh, that I have been searching out Vietnamese restaurants ever since. And probably my favourite food city is Vancouver (you’ll be pleased to hear), because of the fresh fish, and the variety of great restaurants, and THAT market!! Oh, and Easter Island was a surprise: the best ceviche and pisco sour in South America. (Ed.’s note: Oh how lovely that you’re a Vancouver fan! I’m pretty happy that it’s my new hometown AND that I can walk to the Granville Island Public Market. And cool to know about Easter Island … I’m a huge ceviche fan and will try to get them and sample soon!).

14. Country / city where you’ve found the worst? What made it so awful?  Actually, Senegal. But not because their cuisine is bad, just because it just did not work for me. A lot of dishes incorporate plantain, and anything banana makes me feel sick; then the fish — and I love fish! — tended to be species I did not know and were served whole, so it was a continuous struggle to fillet the fish without choking on too many bones. Luckily the fruit was perfect and the street food of corn on the cob grilled over embers suited me down to the ground. 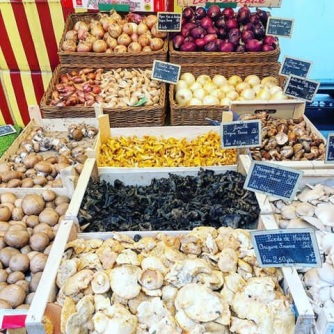 Mushrooms in a Paris market; photo by Ulrike Lemmin-Woolfrey

15. Do you have favourite markets for a) buying stuff to eat b) finding unusual things (which you may or may not want to actually eat!) and c) just for taking photos?  In Paris, I regularly travel down to the 13th arrondissement, to the Chinese markets when I have a craving for corn on the cob. The French still believe it is animal feed, and you don’t find it on most markets. For pictures, I have a little local market nearby in Rue Poncelet, where the seasonal treasures are always on display. For street food my favourite market, not too far away, is Borough Market in London.

16. If money were no object, where (and what) would you eat?  Money, logistics, calories and stomach capacity no object I would start with the wasabi king prawns at Hukama in Dubai, UAE, and the tuna tataki at Nobu, HK. Then the soupy porcini risotto from La Colomba in Venice, Italy and the turbot from Kampa Park restaurant in Prague. The meat course would have to be the kobe beef from Hanagatami in Osaka. All followed by the gigantic cheesecake from Café Lalo in NYC.

17. Do you have any food regrets?  I spent a fortune, very serious money, on a meal at Jules Verne in the Eiffel Tower once. Glorious location, but the food was only good, not superb, and I was surrounded solely by (rich) tourists, with the (Michelin-starred chef) obviously catering for non-return business. Such a waste of money.

18. If you could invent any ice cream flavour, what would it be? (yes, I am looking for ideas to add to my ice cream repertoire!)  My favourite has already been invented: black sesame ice cream. Sorry. That said, is there champagne ice cream yet?

19. What do you love and hate about food writing (yours and/or in general)? I find that a lot of serious reviewers throw too much jargon around which puts me off. But worse is when you can spot a reviewer who has been hosted a mile off. I once came back from Heron Island, Australia, it was one of my favourite trips, the best scuba diving ever, great island, but the food was dreadful. Still, on the plane I read a travel report on the island’s restaurants and the woman was raving about it. Argh.

20. You’re having surgery tomorrow and there’s a reasonable chance you’ll lose your ability to taste (oh the horrors!).  What would you choose as, essentially, your last meal?  Noooo! Shoot me now. Anything with truffle, garlic, something with tarragon sauce, some crispy bacon and a nice lemon meringue pie. And some fresh raspberries. And cherries. And watermelon. And Lindor chocolate. And ….

Ulrike’s website is at www.ulrikelemminwoolfrey.com. Give her a follow on Instagram at @WriteAroundTheWorld, on Twitter @ULemminWoolfrey, and connect with her on LinkedIn at UlrikeLemminWoolfrey. And if you’re planning a trip to Australia be sure to check out her books!